Free-range children – and their parents – can often get a bad press. The term has come to be associated with a kind of laissez-faire parental attitude, that turns a blind eye to bad behaviour and lets entitled children roam around outside unsupervised, putting them in danger and causing mayhem wherever they go.

It’s ironic, because the true thinking behind raising a free-range child, and all the physical and emotional resilience the concept encourages, is probably much closer to the hands-off parenting/childhood experienced by those who rail against it, than that of any supposedly free-range child today.

The idea of a more natural childhood, one spent largely outdoors, without physical boundaries or ideological limitations, was first conceptualised in the late 1700s by Jean-Jacques Rousseau in his book Emile. In it he argued that if children were allowed to develop naturally, following their instincts and playing freely outside, they would grow into happy, healthy adults. 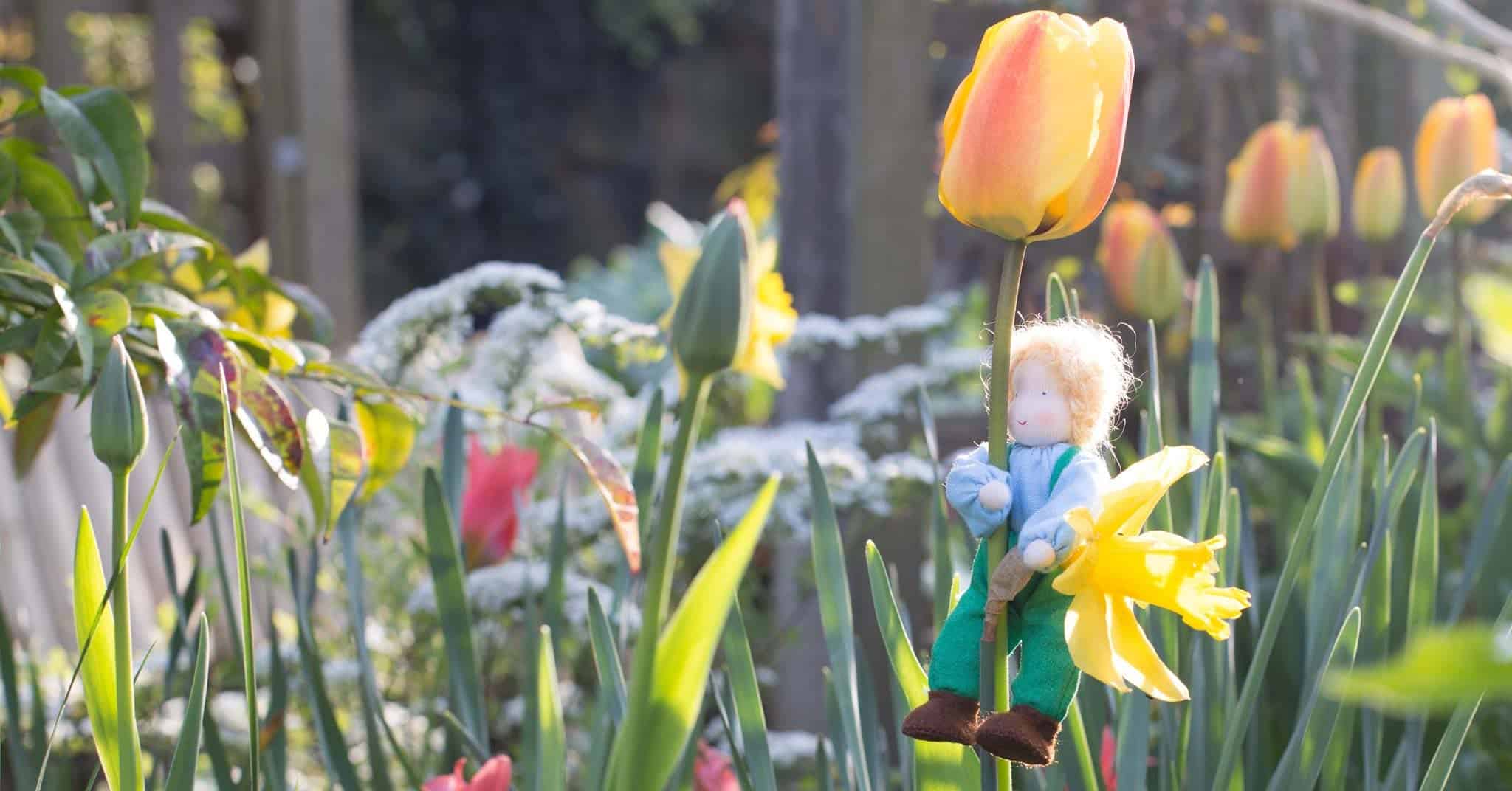 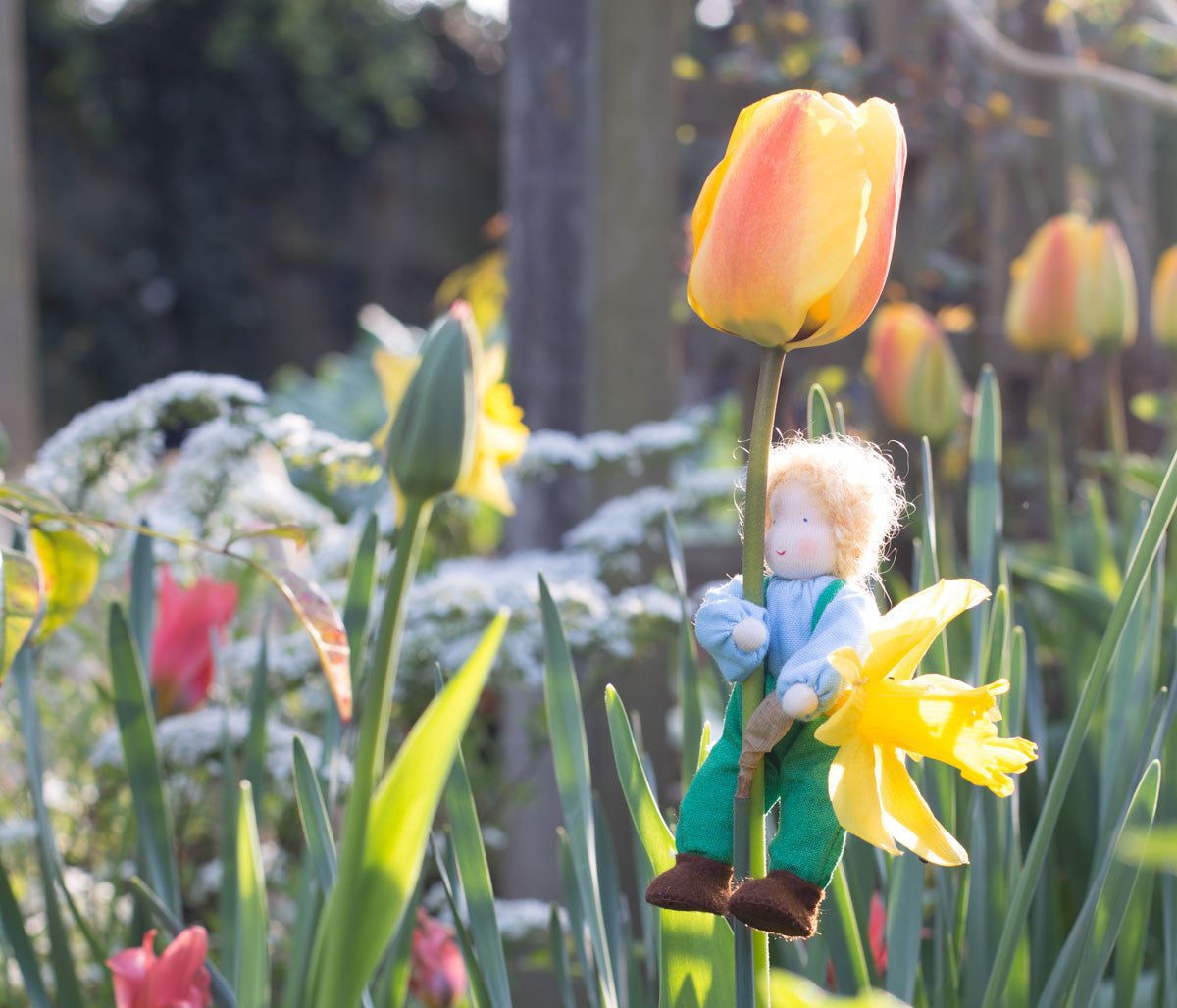 Having fun in the spring sunshine. Jack and the Beanstalk? A fireman sliding down a pole? A pirate climbing up the mast to the crow’s nest? You decide.

More recently, American Lenore Skenazy coined the term Free-Range Kids after she was vilified for allowing her nine-year-old son to catch the New York subway home from school alone. The idea was, she said, a way of ‘fighting the belief that our children are in constant danger’, giving them trust and responsibility to negotiate the outside world, and thereby foster independence, rather than cocooning them and stifling their innate curiosity.

In 2010, Laura Grace Weldon’s book Free Range Learning: How Homeschooling Changes Everything, took the idea further, laying out an educational pathway – or perhaps a lack of one – for the increasing number of parents and families who felt that mainstream schooling and the modern emphasis on classroom-learning and academic success wasn’t working for them.

In it Weldon argues that all children are naturally free-range learners, building knowledge and skills instinctively in their daily lives, while observing, exploring and pursuing their interests. The natural world, says Weldon, with all its resources and challenges, is the only classroom a child needs: ‘Throughout most of history children were not provided specialised play instructions, let alone playthings. They created their own fun with minimal supervision. Adults often expected children to help with necessary tasks but considered play a child’s domain.’ 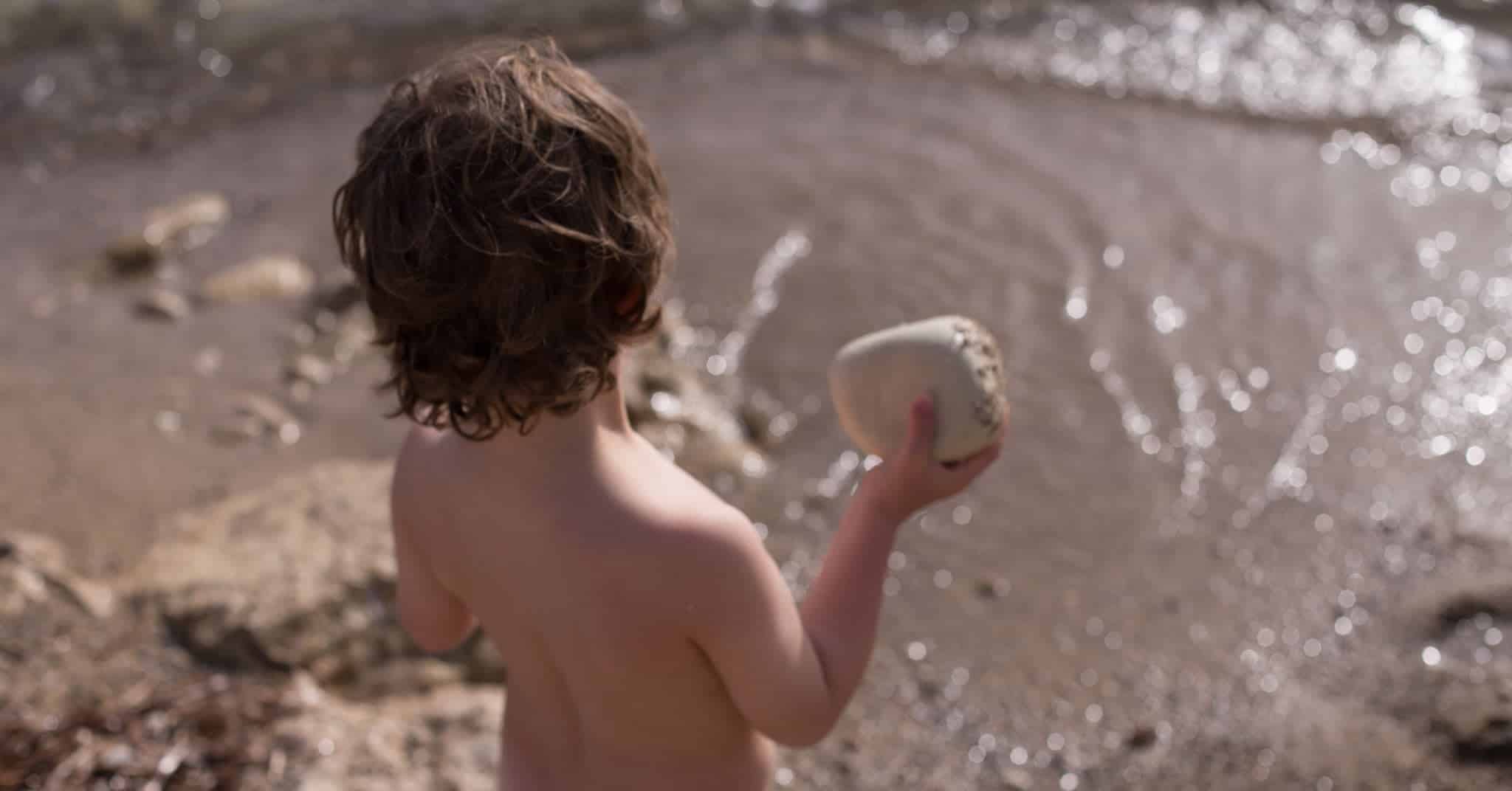 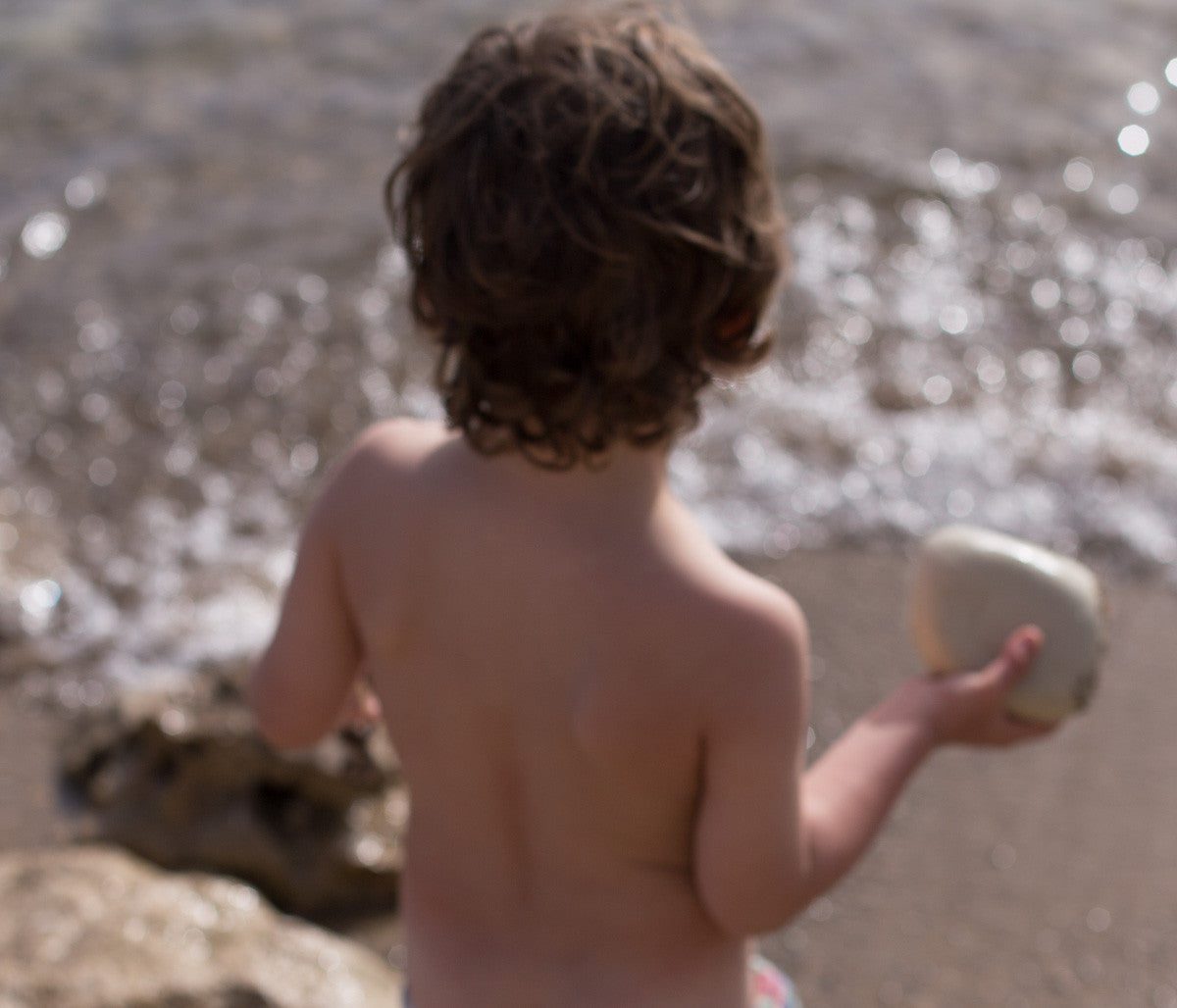 Science lesson in the sun. So much to learn from just throwing a stone into water. Weight, trajectory, displacement, gravity. Children with lots of practical experience of nature and forces will have an instinctive feel for much of the science they later learn in school.

While for many of us the idea of going the whole hog and homeschooling our children remains a terrifying, not to mention wholly impractical idea, we can all agree that spending too much time cooped up inside isn’t good for anyone. Smaller homes, 24-hour television and the same-old familiarity of the toy box full of plastic only make things worse.

It’s no surprise that much of what we consider ‘bad’ behaviour – shouting, tantrums, hitting – happens under these circumstances. How many of us can remember a child ‘misbehaving’ at the beach or in the woods? More often than not ‘problem’ behaviour happens in unnatural environments, if not at home then in the supermarket or the department store – other synthetic spaces that deprive human beings of much purpose other than to consume.

The increasingly popular concept of forest schools goes some way to address the problem. Nordic-style nurseries and kindergartens use the outside to teach, with children wearing waterproof clothing and spending time outside whatever the weather. Wide games, rope walks, tree paintings and trail-setting are all part of the curriculum in forest school – the physical and mental challenges they present keeping children enthusiastically engaged, with the knock-on effects to their academic success being entirely positive. Their growing popularity in the UK (since 1993, over 12,000 forest school teachers have qualified) reflects a growing desire to get our children outside more and to embrace the learning potential that learning outside and being free to roam represents. 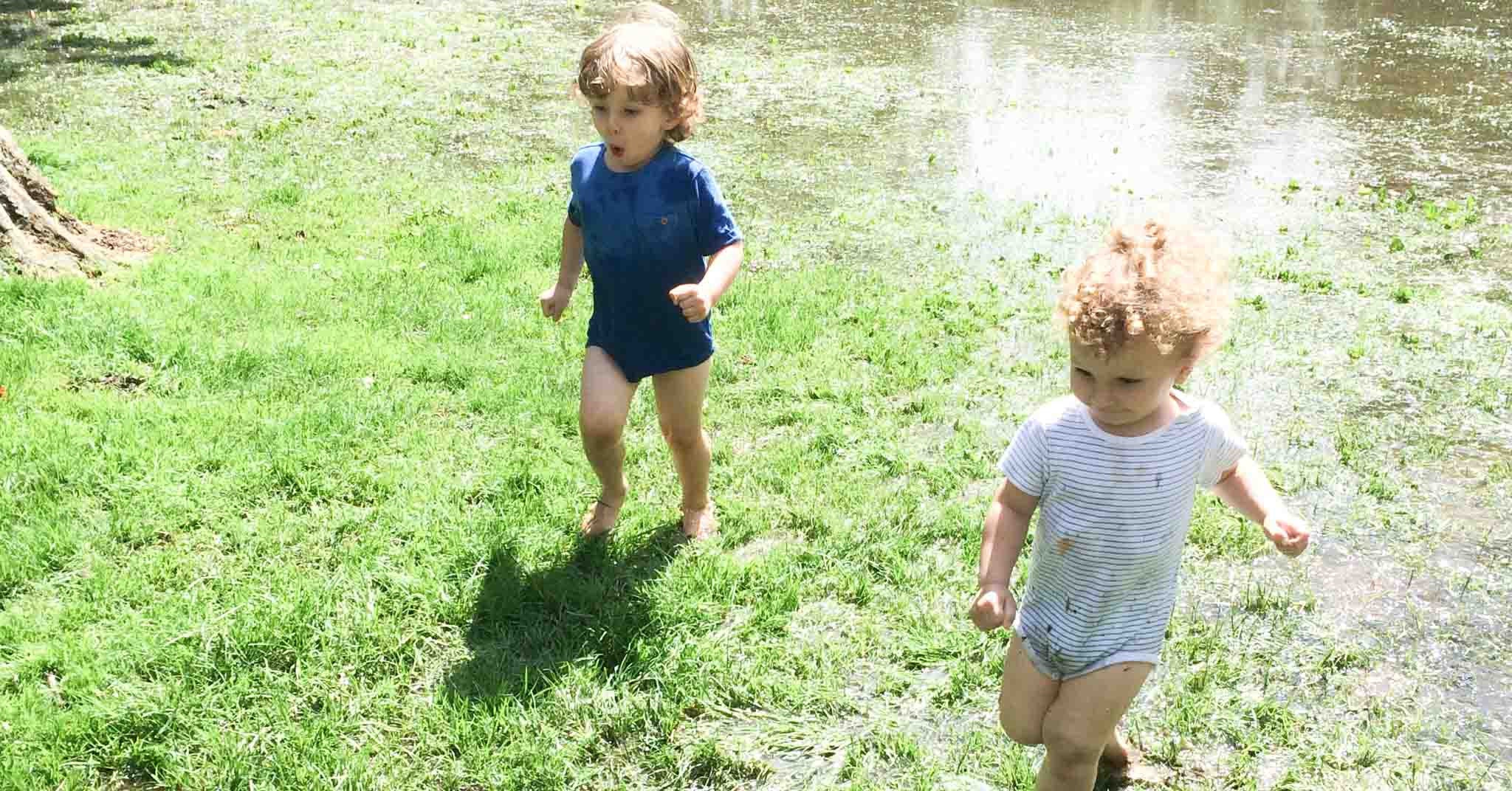 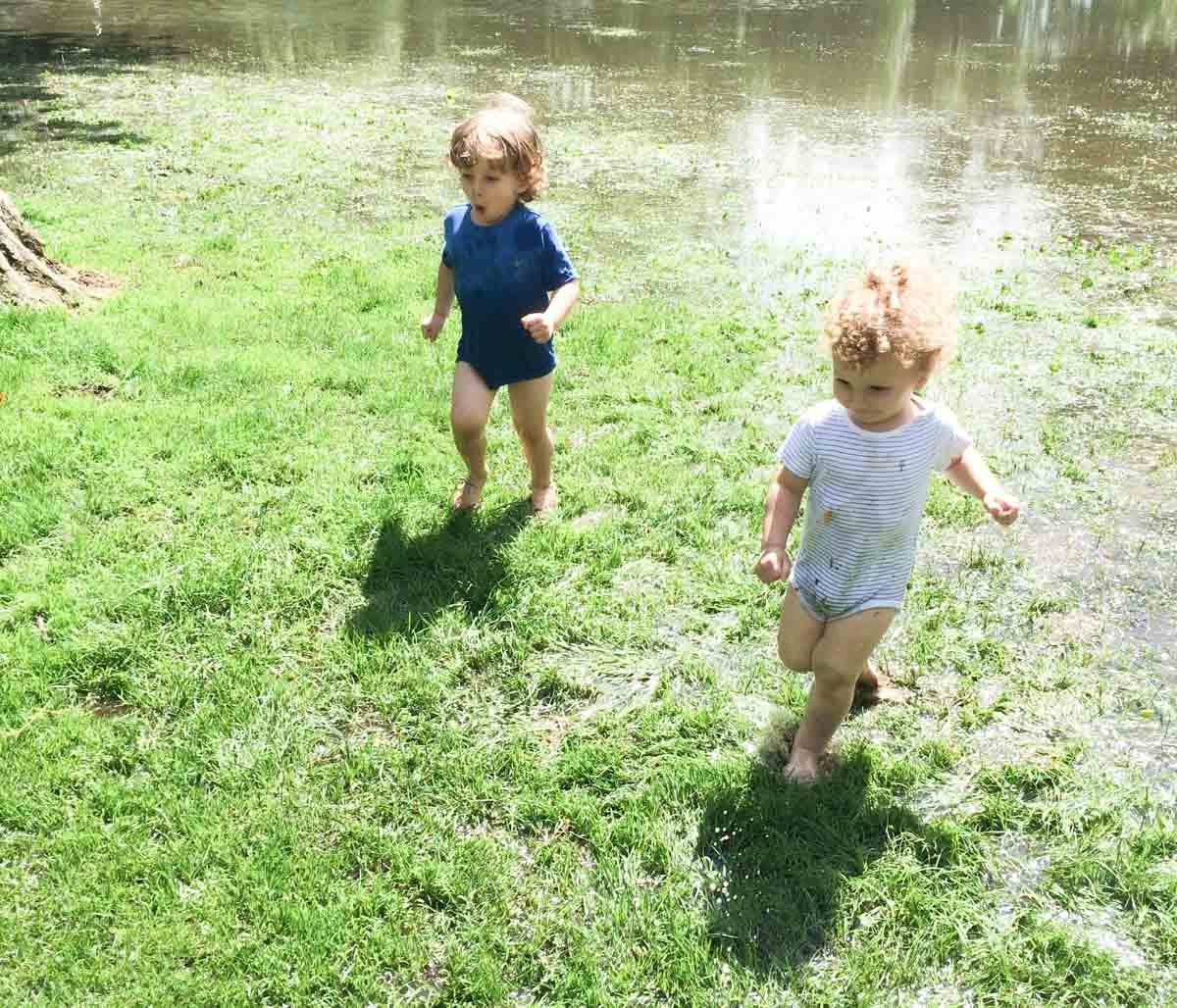 It’s OK to get muddy. Heavy rains and the local park floods with water. An hour barefoot, squelching across swampy ground makes for a memorable experience, especially for children who spend most days in shoes and waterproof jackets, protected from the elements.

But forest schools aren’t accessible to everyone. If your local nursery or pre-school doesn’t offer outdoor education, and you’re a busy modern family with little or no outdoor space and maybe a main road nearby – how do you begin to provide the kind of free-range learning opportunities espoused by Weldon and others?

Nurseries with a truly child-centred ethos, where the child is seen as strong and capable, can help. The sort of project-based learning found at this type or kindergarten or pre-school assumes that the child feels about their play the way an adult might about a project of their own – puzzled, engaged, challenged and eventually, proud. But again, access to these facilities is not always easily available – and moreover not wholly necessary.

All too often we think of toys as a way of entertaining or keeping children amused, but the right toy – one which engages and stimulates the senses, and ideally doesn’t involve much adult input, can press all the same buttons as time spent exploring the outdoors. It will certainly have more lasting impact than the kind of one-way content they might ingest via an app or electronic device.

Think carefully about the type of toys children have available to them and you can still give them opportunities to problem-solve, persevere, work independently and collaborate. For example, consider the almost limitless potential for play present in just a small patch of earth or lawn. You could: 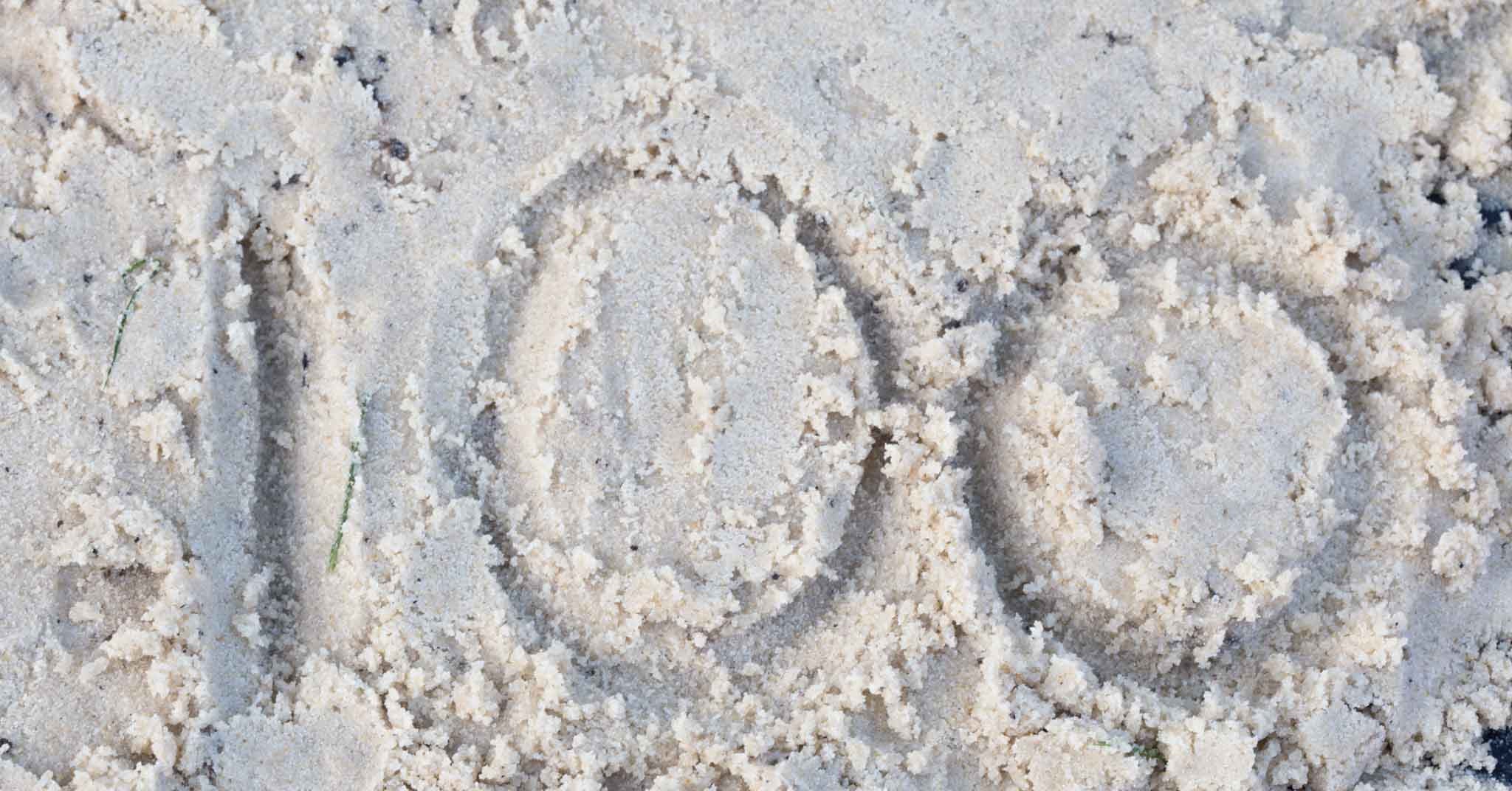 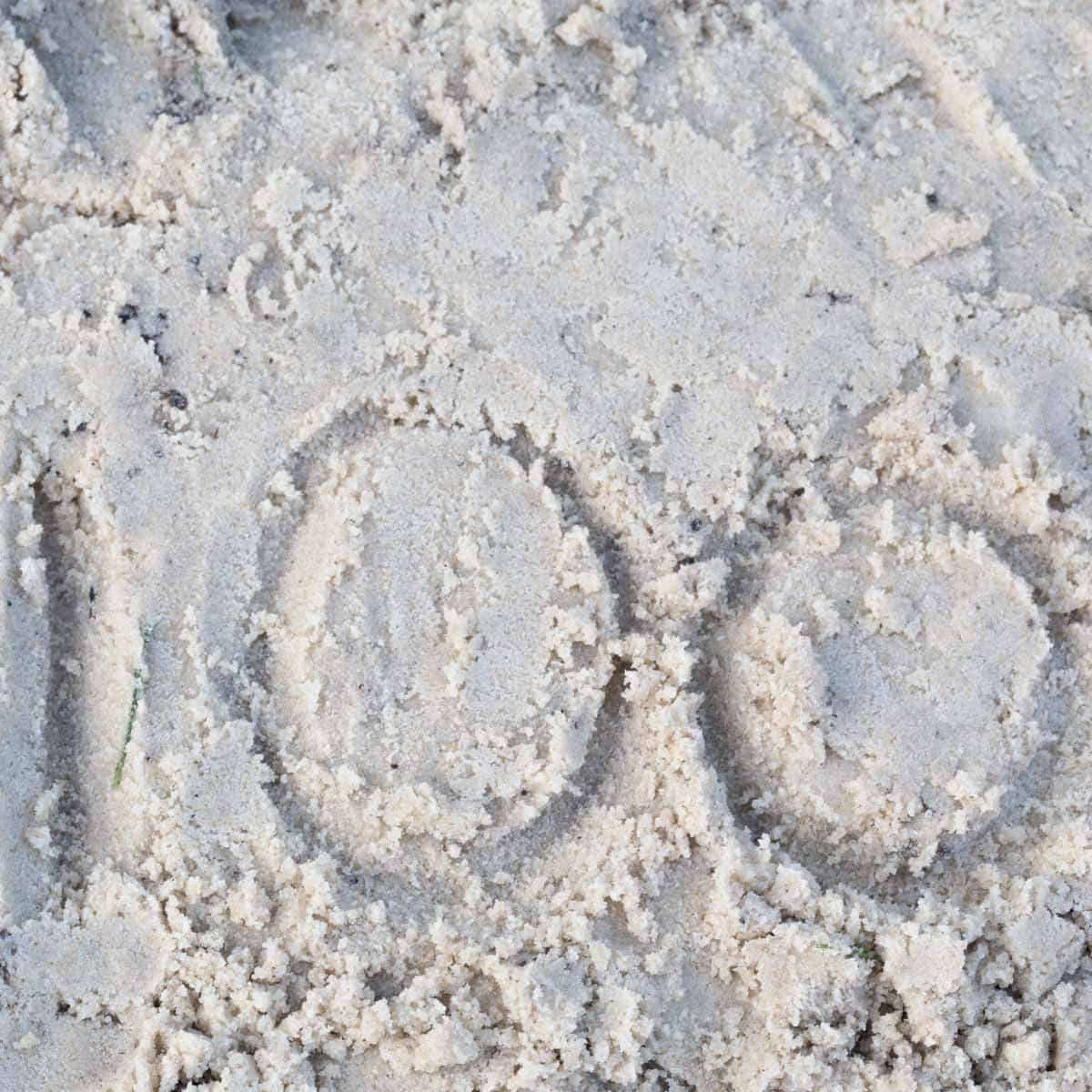 You don’t need a pencil to practise writing. Long before pencil grip is well established, children learn to make marks using just a finger or a stick. Much more fun than being stuck inside tracing letters in a handwriting book.

Now if you are unable, like most of us, to spend hours in the woods with your child doing this, then you can re-create some of the scenarios, and reap the same learning rewards, by ensuring your toy box has the following:

We’re not saying you can buy your way to a happier, more intelligent or creative child. We know that toys are not always enough. Indeed, a large part of the One Hundred Toys ethos is that most children have far too many toys – that’s why we offer so many suggestions for free activities and games, particularly those that are outdoor-based. But we also believe they’re not bad.

Toys that are open-ended, with unlimited potential for play, in the same way as natural materials like wood, sand and water, are the goal. A child will happily play with water for many hours because there are so many different things to do with it, and water play requires very little input from adults. Spending quality time with children, playing and reading, is certainly important. But children also need time to explore by themselves, to develop skills at their own pace and the determination and belief that they can solve problems by themselves. 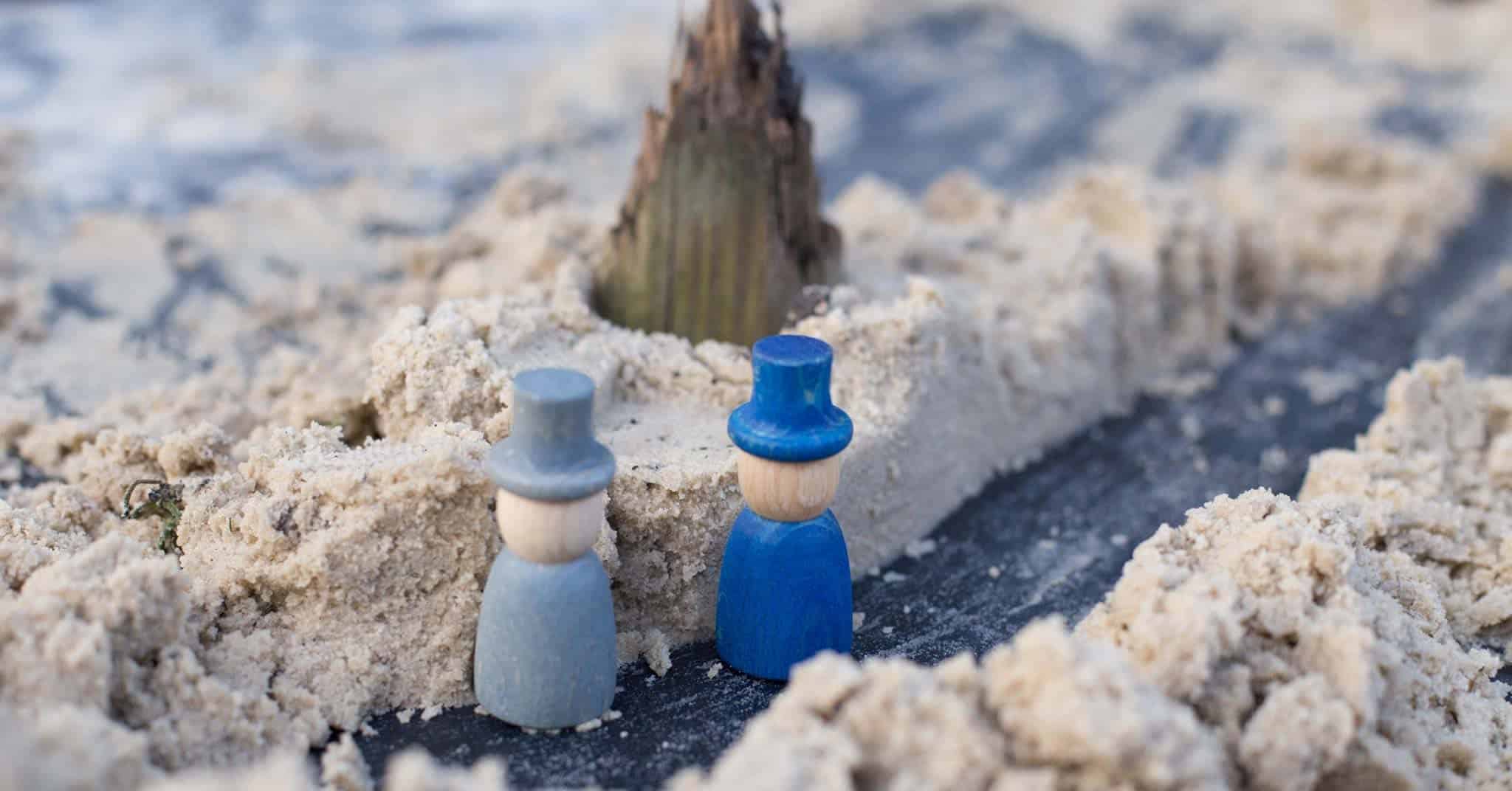 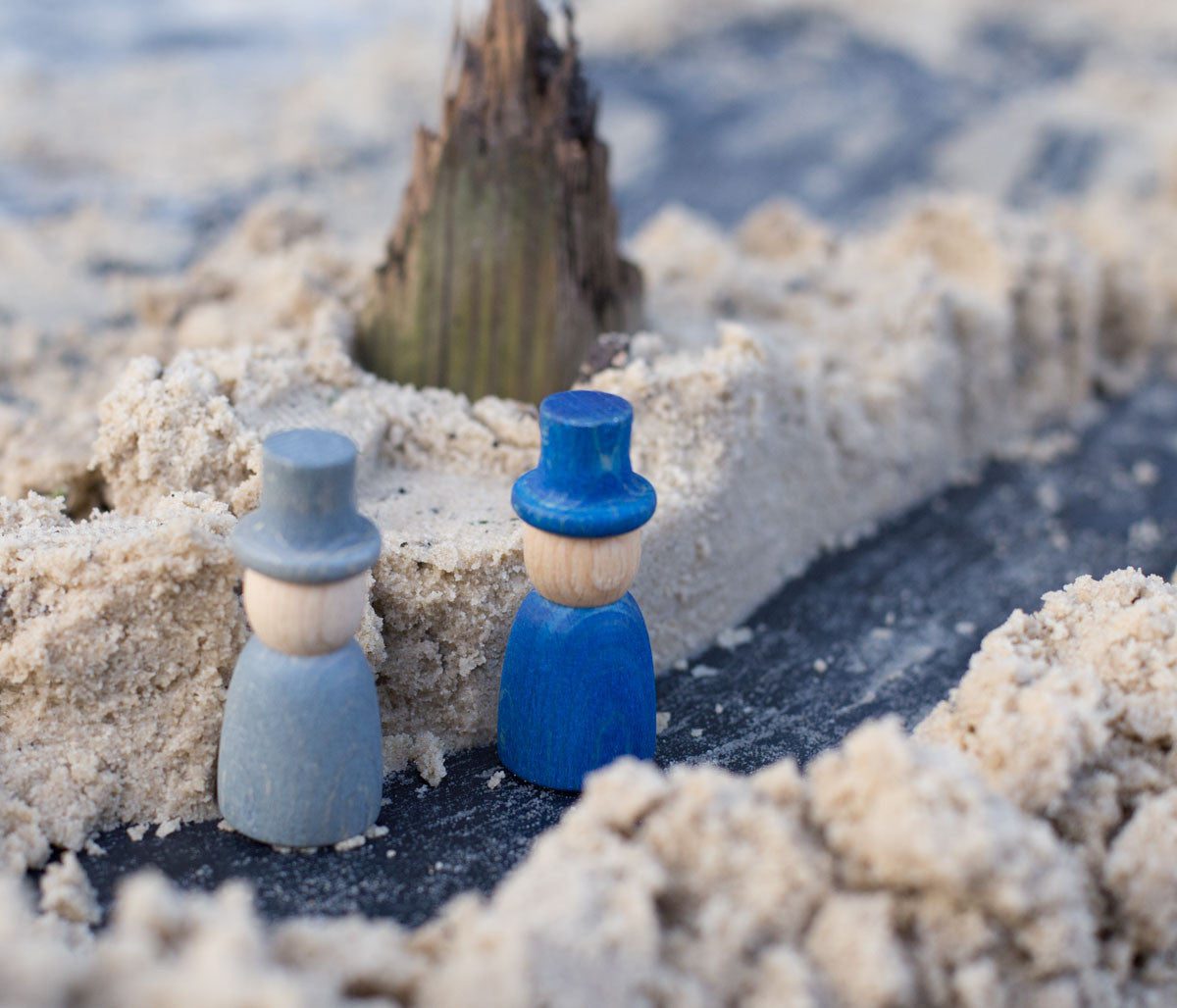 If you can’t get to the beach or the woods, a simple builder’s tray (sometimes known as a tuff spot) is a great way to bring the natural world to an otherwise nature-free urban space. You can even use it indoors. Fill it with sand, soil, water, leaves, stones. Anything you can get your hands on. A single line in the sand and you have a road and the beginnings of a story for a small world activity. Or grab some beakers and water to make an experiment about pouring and measuring.

Adults aren’t entirely surplus to requirements, but should be thought of as people to be alongside, rather than engaged in play with. Children like to help out and be useful, that’s why role play is so popular. When they have helped in the kitchen, perhaps chopping the bananas to go in the pudding, or washing up the plates, they can then practise their new skills in their own play, using pretend food and utensils. This modelling is important. Many children will enjoy sweeping up, but only once they have seen you do it first. They will be far less interested if you hand them the broom and say: ’sweep up your mess!’

As Weldon puts it: ‘In the final analysis, it is not an adult’s responsibility to create fun for a child. Trying to keep our children amused is part of the problem. At the very core, play is a child’s own creation. When children play, ordinary moments are transformed with imagination and movement. Those who keep the spirit of play alive as they mature can maintain the sort of creativity and fresh thinking required to adapt in a quickly changing world.’