We talk a lot about play for the under fives here at One Hundred Toys, but what is play and why is it so important for young children? Read our guide by Helen Jones to learn more about the benefits of play and pick up some ideas for maximising play at home.

[TEXT BOX] ST NOTE: I have changed this from the original supplied by Helen as I couldn’t find it online and this one seemed to be the most  widely accepted one

Children at play are not playing about; their games should be seen as the most serious-minded activity.

We talk about what play is a lot here on the One Hundred Toys blog, and that’s because its significance really can’t be overemphasized.

Children have never been exposed to so much, so early. There are so many limitations on their time, educational pressures in schools and distractions competing for their attention (smartphone, smart watch, email, TV….). It is worth reviewing why we all need more play in our lives, and we’ll do that shortly.

But first of all, what is play? It seems obvious, but as adults we do forget; I know I certainly have.

Getting back to the basics of children’s play. Child Care Information Exchange.

Although a definition is helpful, it can conceal the limitless possibilities play offers, across ages, countries and cultures. Play is written into our history.  We all know it, we all partake in it (or at least used to), but we don’t actually spend that much time thinking about it.

The spirit of play is in the absence of goals or rules (well unless they are self-imposed rules for a game the child is concocting).  Because it needs to be self-motivated, without an end outcome in sight, it can seem superficial and an unnecessary luxury. At worst, we are led down an illusory path to the conclusion that it is a time-wasting exercise, which deters children from being in the ‘real world’ and learning important academic activities – evading reality by immersing themselves in fantasy.

But rest assured play is NOT a time wasting exercise. It has magnitudinal advantages. And our downplaying of play, according to Francis Wardle, reflects an adult’s – not a child’s – lack of understanding.

Why we all need more play in our lives

So why is play so important? We can’t afford to assume it is an unproductive luxury, and here are some of the reasons why:

Learning is implicated in many forms of play and some very sophisticated forms of thought can happen during seemingly innocuous play. The enjoyable and leisurely aspect of play can make it seem simple, but there are reams of research on the complex cognitive developmental leaps that it yields. Play actions might seem silly or illogical, but they are often complex and informed. In his book Drawing and Painting: Children and Visual Representation, the author and artist John Matthews says: “Children’s play is not so much random as purposely randomised; in order that a wealth of possibilities emerge.” Children aren’t just playing with objects, they’re playing with ideas, identities, healing traumas, making sense of social scenarios, and developing self-knowledge.

Children don’t see how the world should be; they see how it could be. Play opens them up to these possibilities. When children are released from any restrictions, or adult-imposed direction, they have the freedom to move, act, and behave in line with their imagination.

In play we are relaxed, there is no end goal, no pressure, we are at ease, we are comfortable in our own skin. Children play because it’s so endlessly enjoyable. In his essay The Importance of Play, Austrian psychologist Bruno Bettelheim wrote: ‘Perseverance is easily acquired around enjoyable activities such as chosen play. But if it has not become a habit through what is enjoyable, it’s not likely to become one through an endeavour like schoolwork.’ Without pleasure it’s mere obligation. Too often we see enjoyable activities as luxurious and superfluous, yet just because play is children’s favourite way to learn, it doesn’t diminish its serious value.  When kids play with a new possibility, combination, process or idea, and it doesn’t work, no one loses. In play you can’t fail, but you can succeed. That success can come in any form, but most especially in the form of a whole-child education.

According to Bettelheim, there are sometimes feelings ‘that the child themself would remain ignorant of, or overwhelmed by, if they did not deal with them by acting them out in play.’ ( If you’re not convinced  of how therapeutic play can be just look at the whole branch of play therapy or ‘Theraplay’. It is a safe way to dip one’s toe in the water of emotional issues and explore multiple ways of dealing with scenarios.) In his book The Book of Play, former children’s laureate Michael Rosen wrote: ‘Play provides a safe psychological space for children to think about frightening realities. No one individual is in charge of their destiny, and a playful outlook can be very helpful with this.’  Life is chaotic and unpredictable; if the current pandemic has taught us anything, it’s that. But play can help us cope with change and provide release from stress which undoubtedly, even if imperceptibly, enters our children’s lives.

They can explore social, emotional, moral and intellectual concepts. The experts claim play is, in fact, the best preparation for adulthood. Wrote Bettelheim: ‘Play teaches the child, without his being aware of it, the habits most needed for intellectual growth, such as stick-to-itiveness, which is so important in all learning.’ . While children play in the present, they are building on learning from their past, and developing skills for the future.

While these are some of the benefits of play, this list is certainly not exhaustive. There are a plethora of forms play can take, each of which elicits its own advantages. Play is so powerful, it has been a part of our development throughout the ages.  It’s a practice so essential to wellbeing and survival  that even animals do it. 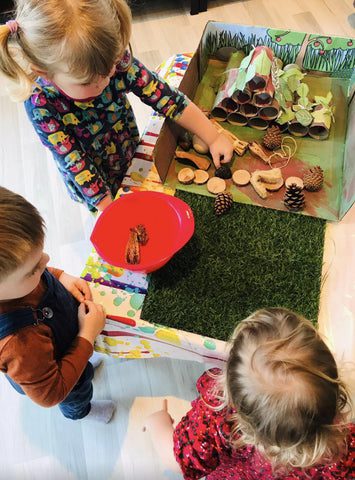 Play with others really builds those oh-so-vital social skills

So how do we maximise our children’s play at home? As our children’s carers no one can be as deeply invested and personally engaged in their play than us. We can support and enrich our children’s play in a multitude of ways. Actions speak louder than words; It’s not what we say about play, it’s how we behave around it.

Provide lots of opportunities for play.

Open up part of the daily routine for play. Offer time and space, not only to move their bodies, but their minds. Be encouraging and supportive of all forms of play, and open-minded as to what play can be.

We don’t need to teach our children to play. According to Bettelheim, the way a child wants to play is often very different from the way his parents want him to, but ultimately your child knows best. It’s inviting to point out to your child how to play with a toy in line with its intended purpose, but by releasing objects from their usual functions, kids can detect new characteristics and opportunities. So much of children’s worlds are dominated by adults, we choose their schedules, their clothes, their food – let’s not let this leak into their play too. Bettleheim says: ‘If we truly took our childsplay as seriously as we take our own tasks, we would be as loathe to interrupt it as we are reluctant to be interfered with when we are working.’ Respecting our child’s play makes them feel secure, and acknowledges the importance of their activities in the whole context of family life.

Be patient with repetition.

So you’ve played peekaboo, hide and seek and seen them use the same toy a million and one times already… surely they don’t want to play it again? How can it be helpful to keep doing the same thing over and over? As John Mattews explains: ‘These discoveries are not made once and for all. What is discovered on one occasion may not necessarily be remembered. The same discoveries might need to be made many times and in many contexts, so that these understandings overlap, as it were, forming powerful concepts. (…) each new experience is not simply a repetition- it adds a new quality or understanding.’ Here our attention is also drawn to the memory-enhancing element of repetitive play and to its ability to build aptitude.

Allow your children to play with what they wish. There is plenty of research indicating vetoing objects classically considered for the opposite gender, could make them more attractive and set up unhelpful stereotypes. According to the theory of auto education children know what they need to help them learn, and it could be that your little girl needs to understand about movement and wheels through playing with that tractor, or your little boy needs to develop his nurturing, caring side through looking after a doll.

Toys often take centre stage in play but play doesn’t even need to involve toys; in fact quite often it doesn’t. It can involve play with others, household objects, or outdoor exploration. In fact, when I think about my daughter, most of her play is with her parents or the most mundane of everyday objects. The oh so wonderful cardboard box. Need I say more? Many of these don’t cost a thing, but the benefits are bountiful. That said, it is useful to have different objects or toys for different play purposes. For instance, rather than having more of the same, try to invest in toys or activities that stimulate a range of skills. Open ended toys are ideal as they offer a variety of uses, longer play periods and can ‘grow’ with your child. [LINK] Access some of our play guides here.

No. This readily-available stimuli makes our children passive rather than active.  I’m not saying it doesn’t have its place, but it isn’t always the most productive or brain-engaging strategy. I remember teaching a child who was amazing at everything; she wowed all her teachers with her diverse talents. I was discussing with a colleague how brilliant she was and he said: ‘Yeah, now there’s a kid who doesn’t watch TV.’ It always stuck with me. She was out engaging in lots of different hobbies, and making active, productive use of her time, and the benefits were enormous. I just hope she remembers me when she’s famous.  In a world of passive screen-watching and scrolling, active learning through play is even more crucial.

But let’s not overcomplicate it because as E Mee puts it in Let Me Play:  ‘Dedicating plenty of quality uninterrupted time to self-directed play is vital. The parent’s main role is to ensure safety and respond lovingly to the child’s requests for companionship and help.’

Play isn’t just for kids. Play with your child and venture together into the unknown. I know it can be hard to find the time, but even ‘micro-play’ snippets of adventuring together into the land of awe and wonder can be all it takes. Don’t play with your child because you feel you should or because you wish to distract, entertain or educate.  Children often detect the ulterior motive. Play with them when there is a mutual desire for it.  After all, they won’t be small for long.

And most importantly, never belittle play. It might be a tiny word, but it’s a huge world.