Opera singer and vocal coach Mary Cole explains vocal development in young children and shows us how we can help inspire our children’s vocal confidence from an early age.

It was a warm evening in late March when I had my first proud mother moment. It happened as I arrived through my front door with Mister Firstborn after his birth just a day or so earlier. He was kindly letting me know, in his most endearing newborn way, that he was Not Happy.

“What’s wrong, baby?” I cried as the door crashed closed, that little scream piercing my ears and melting my heart.

Yes, it was indeed my first proud mother moment.  My son had inherited my voice.

What is it about your child’s voice that will stop you in your tracks every single time, causing you to drop your coffee, your shopping, and your reason? How on earth does that little person make such a big sound?

In my work as an opera singer, vocal coach and university lecturer, this is a fascinating question for me. As singers working with no amplification, making big, beautiful, rich and resonant sounds is on our minds most of the time. I spent twenty years learning to recreate an extremely refined, adult version of my baby’s voice to spend some fabulous years touring the world singing.

I realised in that moment, that my husband and I had done it: we had produced a little Pavarotti. The good news is, so can you! 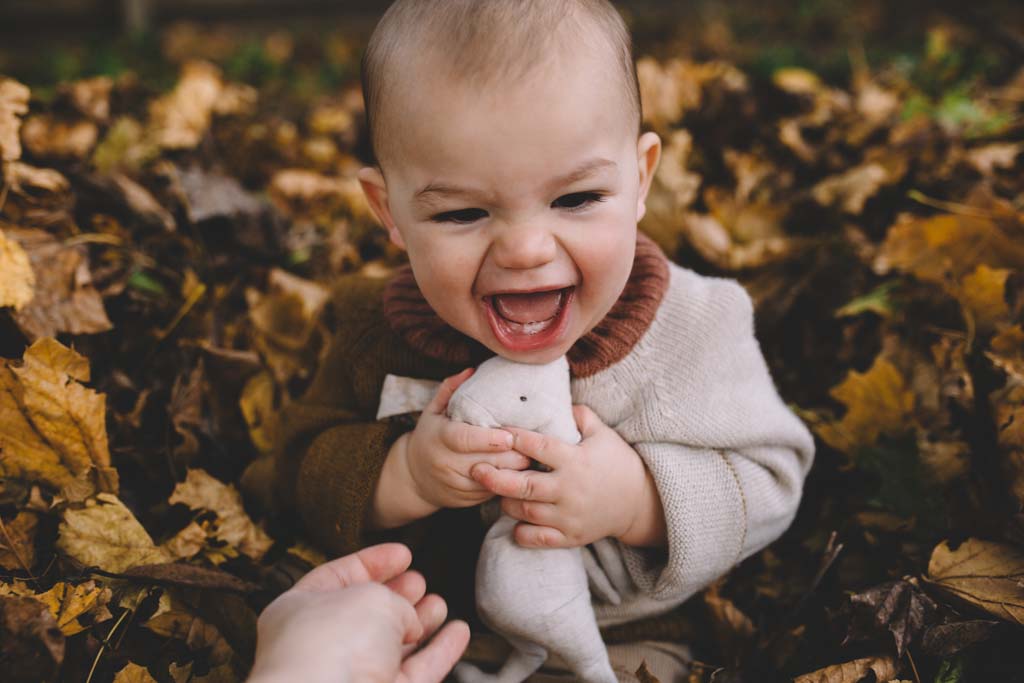 Physical development of the voice in newborn babies

Your voice is produced when the vocal folds are powered by air from the lungs to vibrate, thus producing sound waves.  This sound is then shaped by the pharynx, tongue, mouth, teeth and lips to create speech and singing.

Your baby’s vocal physiology is fundamentally different in structure and function to that of a child or adult, set up mainly to ensure their survival. It has two functions: to cry for help and to drink in the most efficient way possible.

Babies therefore have much smaller lungs to make more space in the digestive system for milk. While an adult’s larynx is located about halfway down the neck, a baby’s is located right behind their jaw and is much less mobile. The epiglottis overlaps with the soft palate and the vocal folds themselves are much softer and more pliable.

This different physiology offers a newborn several benefits. Firstly, it virtually eliminates choking when nursing, allowing them to breathe and swallow at the same time. They are also able to fill their mouths completely before swallowing, which means more milk in less time- a huge advantage for the initial growth period.

This physical setup also produces and enhances high frequencies in the vocal sound.  Amazingly, the average baby only cries at about 90 decibels: as loud as a blender or hairdryer.  However, the high frequency amplification is what gives the cry its “cut”, allowing them to be heard clearly.

The vocal apparatus while crying is also surprisingly free of excessive muscular tension.  This, coupled with the softer tissue, is how your little one can cry for hours without losing their voice.

What your baby is practicing vocally

From the moment of birth, your baby vocalises. Newborn cries contain all the elements of successful speech and singing: emotion, pitch and rhythm, loud and soft.

When not crying, your baby may practice cooing: happy vowel-like sounds lasting up to three seconds in duration.

Here are some simple tips for inspiring your baby’s first experiences with voice:

Does your voice change when you talk to a baby? Do you speak more slowly, more clearly and use simplified language? Do you use baby words and exaggerated facial expressions? This is motherese. You are making it easier for your child to understand you. By removing unnecessary words you draw your child’s attention to those that are most important. Vroom, vroom! Nee-naw! Look! Fire engine. Red fire engine. Can you see it? Off it goes! Bye-bye fire engine! Mummy likes fire engine. Noisy!

Physical development of the voice in infants

During infancy, the vocal structure begins to develop into a miniature version of the adult’s.  While a newborn’s vocal tract is primed for survival, the child’s and adult’s is set up for speaking and running.

The infant’s larynx grows and descends lower down the trachea and the lungs grow comparatively larger to the digestive system.  This gives them much more range and flexibility in the sounds they are able to make, though the adult setup won’t be complete until the age of eight or nine.

What your infant is practicing vocally

Speech to the infant is observed and copied rather than taught. Having been immersed in a speech environment from birth, they are able to observe the benefits of using speech in their world.  Thus speech’s development is mainly driven by the frustration an infant feels in being unable to communicate.

Infants’ hearing and perception of music is also extremely sophisticated. By the age of six to ten months they are able to recognise familiar tunes and changes to them, even though they may be played in unfamiliar keys. They will also recognise songs heard in utero, though it may be months between hearings. They are also able to recognise simple rhythms and metres: for example a march versus a sway (duple and triple.)

Some ideas for creating fun and positive vocal experiences with your infant: 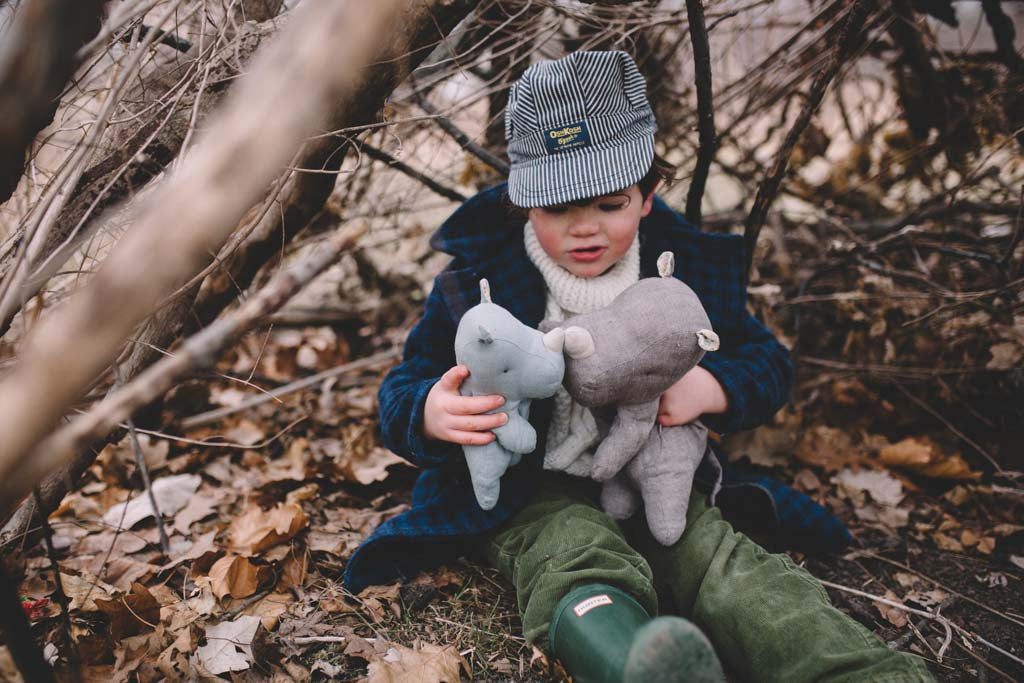 Physical development of the voice in toddlerhood

Toddler vocal development is a continuation of what has begun in infancy. As a toddler’s body size increases, so does, obviously the laryngeal size. Interestingly, up to this age, the tongue has been housed entirely within the mouth to enable nursing and breathing simultaneously. The back third of the tongue now descends into the pharynx, as well as a slight hardening of the vocal folds as the deeper muscle forms. This enables much more variety in speech resonation and articulation.

By age five, the basic adult configuration of the vocal tract is present, and will reach full size after puberty.

What your toddler is practicing vocally

While a yell is still able to make a statement, a toddler comes to realise around the age of three or four, that speech is necessary for survival: needs are met faster if they’re articulated.

A toddler’s first meaningful word usually appears at around one year of age, with three to ten single words hopefully available by the age of eighteen months.

At around age two, your child may use around fifty words, gradually forming into complete sentences. By three years, we may see the emergence of conversation, and vocabulary may exceed one thousand words!

During toddlerhood, music and singing becomes a part of play. Voiced sounds can accompany play with toys; chanting and songs become part of organised games with others. 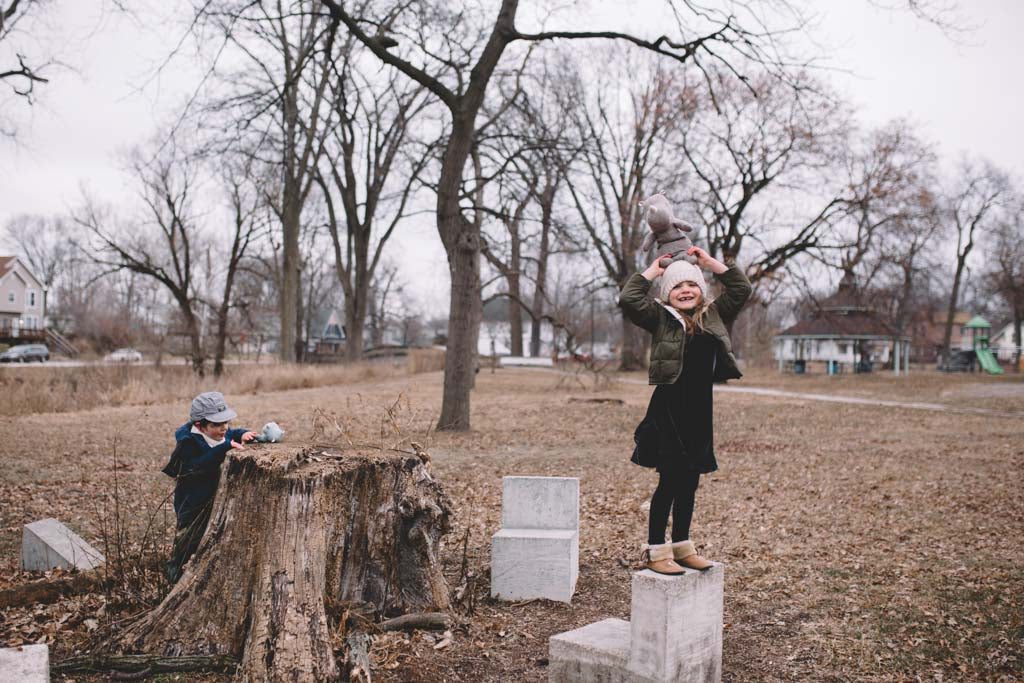 Some ideas for helping your toddler find their voice

Practice patience in conversation. Allow your child to explore speech at toddler pace, not adult. As they become more conversational, the brain is working hard forming the neural pathways required for communication. They must firstly comprehend what you’ve said and form a reply in their own mind. Then they must physically speak by co-ordinating breath pressure, vocal apparatus and articulators.  This takes time.

Try not to interrupt, walk away or finish their sentences. Maintain eye contact, listen and enjoy.

Encourage your child to use the voice creatively as they play. It could be singing to toys, creating vocal effects for vehicles and superheroes, animals and outer space. These nonsense noises are used a lot in formal training to build and strengthen a young voice, as well as to explore musical elements such as pitch, timbre and rhythm.

Singing stories. Sing the words to a favourite book rather than speaking them. Invent a simple two or three note melody. To start off, try the opening notes of the nursery rhyme It’s Raining It’s Pouring. You will notice that tune is also a familiar one in many children’s chants: ‘I’m the king of the castle and you’re a dirty rascal! Nyah Nyah!!’ In early music education, it’s the first interval we teach children to sing in tune, as it is so easily accessible.

Nursery rhymes and children’s songs. Nursery rhymes are full of expression and poetic devices just asking to be explored: rhyme, rhythm, stanza, refrain, alliteration, imagery and many others. Enjoy reading them aloud with plenty of gusto and fanfare, creating the voices and sound effects.

Move along to the rhythm of the words. Songs with actions have greater impact and memorability. Vocalise for fun, as well as for education.

A word of advice: if you want your child to speak (or sing) along with you easily, speak a little higher than you usually would. Their tiny vocal folds are only as large as their little fingernail. It is impossible for this little instrument to pitch too low!

My young screaming newborn is now Mister Two. It has been such a joy to watch him grow and piece together fragments of sentences, to sing mum’s songs to his toys sometimes weeks later, and imitate his dad’s heavy machinery sounds! As for that initial cry? Poor dear- he was hot!